I visited Chicago for a few days in May 2019. The weather was still cool and good to explore the city. Like most tourists, what attracted me to Chicago was learning about the evolution of the architecture that took place after the great fire of 1871.

After the great fire, architecture in Chicago flourished.  (1) “The city arose from the ashes with innovation in building construction and originality. The advent of new materials from concrete, steel and combination thereof has sore our skyscrapers higher”. (2)

The following innovations gave rise to the magnificent skyscrapers we enjoy today. (3) 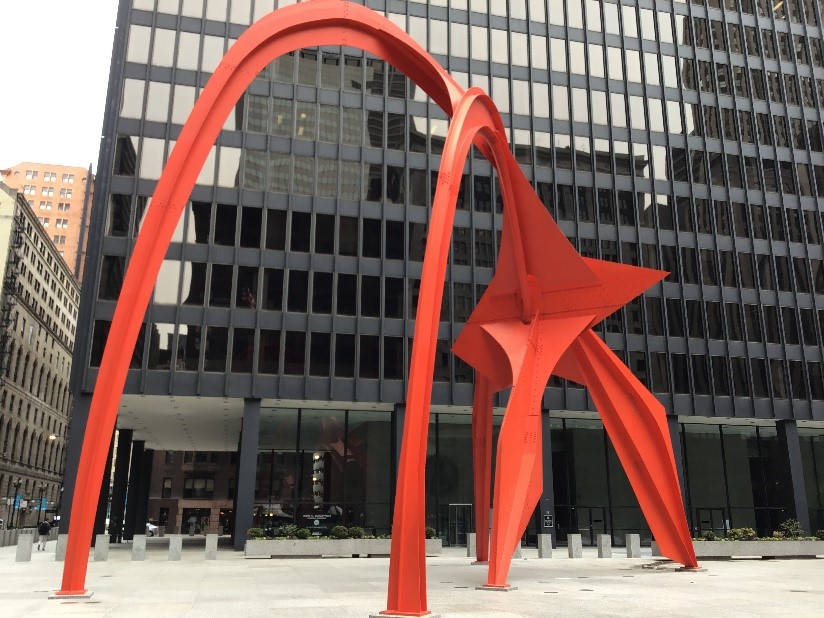 The introduction of steel allowed for a building design that moved away from traditional load bearing masonry construction.  A skeletal structure can greatly reduce building weight without sacrificing strength.  The skyscraper Monadnock Building, is the tallest known building made of brick masonry construction.

Skyscrapers often sway to strong winds or seismic activity. A tuned mass damper is an enormous, heavy pendulum positioned near the top of a tall tower that moves back and forth to counter a building’s movement and minimize the sway.

Highly engineered dense timber beams are increasingly being used to build skyscrapers. These “tall timber” structures have added benefit of trapping carbon dioxide from the atmosphere.

A caisson foundation is made by driving large, load bearing columns deep into the underlying bedrock. Caisson transfers a building’s weight directly into the ground. This technology was first used in the construction of the Brooklyn bridge in 1863 where workers drilled watertight holes into the river bed and filled them with concrete to support the bridge piers.

Wind tunnels were initially invented for aircraft flight simulation. Giant fans create airflow over a model placed in the center of the tunnel and outfitted with electronic sensors to test how the object is affected by various work wind forces. As architects began developing super tall buildings, wind tunnel testing became an integral part of the design process.

Why Should You Hire an Architect?

5 Must Haves for a Good Rendering

Getting Your Building Project Approved