The stereotypical office environment featuring clusters of offices and cubicles for individual workstations is a concept that has been around for decades.  It may be a great strategy for companies whose employees work alone most of the day, with individual assignments that can be completed without collaborating with coworkers.  In the architectural industry, we thrive on collaboration and prefer to think outside the cubicle.

At JL Architects, we work in a studio.  Our workstations are in the same room, we have no partitions, and we are constantly bouncing ideas off one another.  Not only does this collaboration help our projects develop, but it creates an environment of teamwork.  We share tasks and responsibilities as needed, become familiar with multiple projects, and become more well-rounded as designers and problem solvers. 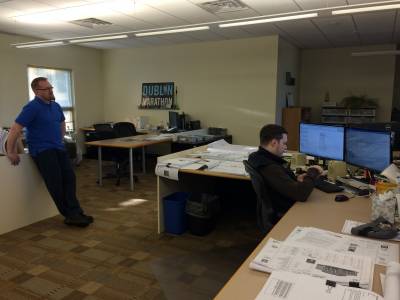 When time is short and a deadline is approaching, our software allows us to practice teamwork quite literally.  AutoCAD allows multiple people to work on the same project through sheet sets and x-references.  Revit allows work-sharing from temporary files on our computers which then sync with a central file on our server, doing away with the ever-so-popular, “This file is read-only. Would you like to open it anyway?” dialog box.

Whether we’re working on codes research, an ADA survey, or a full drawing set, the studio environment at JL Architects allows us to work together to get the project done and become a better team.  Would thinking outside the cubicle work for your organization?

In the world of architecture and design there are a few major trade shows each year. This year, I was fortunate enough to benefit from one trade show’s new geographical location. This major trade show was looking for new growth as it relocated from its location in Baltimore to Philadelphia.

Each year since 1969, NEOCON is hosted in Chicago at the historic Merchandise Mart on the Chicago River. The building has over 4 million square feet, encompasses 2 city blocks and according to its website welcomes nearly 38,000 people a day. And once a year, outside of its daily patrons, it is the site of the largest design exposition and conference in North America for commercial interiors. Thirteen years ago Neocon East was started to bring the same breadth of innovative products that you could find at Neocon in Chicago to the east coast design communities. I have been to the show a few times before, and each time I learn something new that was unexpected.

As mentioned many times before throughout the life of this blog, as architects and designers we are constantly updating ourselves and our design vocabulary through new products and building techniques. Tradeshows are one of the many avenues to educate ourselves, and find design inspiration for your next project in the unexpected ways. The booths that I explored while I was there will assist in finding the right vendors, fabricators or manufacturers which will bring our design intent to fruition. From fabrics to furniture, and finishes to wall systems, the products are in multitude. 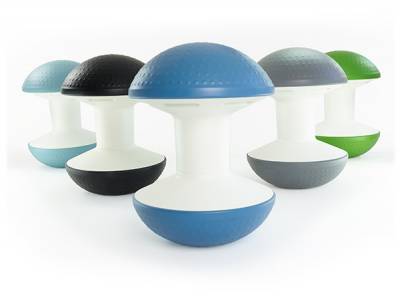 While at the tradeshow I was fortunate to hear a keynote presentation by Jake Barton, from Local Projects. He lead the design teams for the exhibition spaces at the National September 11th Memorial and the Museum at the World Trade Center. In the opening remarks he explored what it meant to have that “one great idea” and how that can lead your project down an inspired path. That idea, coupled with years of design experience can tie a design together and create a memorable experience for the users of the space. In his example, he had an inspirational thought, that “one great idea” while traveling on the subway in NYC. That thought helped to define his proposal for the 9/11 museum and how to tell the story of the day through the survivor’s words. Now through hard work, and design critiques his “one great idea” is leaving an impression on thousands of visitors a day. 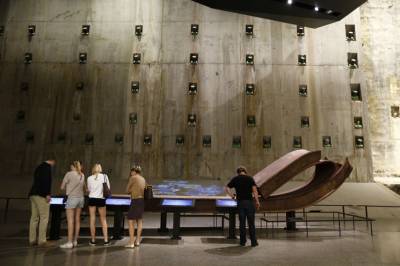 If you are interested in learning more about Jake Barton then watch this video regarding another one of his projects calledStoryCorps.

As an architect you never know when you’ll find a sliver of inspiration that will make a mark on the next project, but by exploring trade shows and keeping up with current trends we can create projects that meet the client’s needs with innovation. At JL Architects we are not only attending events like NEOCON, but researching industry technologies to allow our clients projects to succeed. 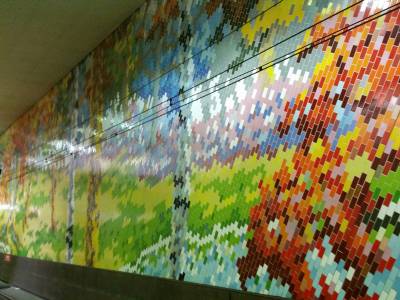 As I was leaving the tradeshow and taking the train back to West Chester from Jefferson Station in downtown Philadelphia I took the photo above. I think everyone could see something different in this tile subway wall. What do you see? And how might it inspire the next generation of architects and designers?