There is an old construction method that is gaining popularity, and tons of momentum in recent years; Modular Building. It’s not just being used in the single family market (double wide anyone?) anymore, but on a much broader and taller spectrum. While across the country, and the world developers are turning to this method, I’m going to focus on New York City’s current initiative.

In a city of over 8 million people, where there are only 1 million one-bedroom or studio apartments for the 1.8 million one to two person households, something had to be done. In 2012, Mayor Bloomberg, along with the New York City Department of Housing, launched the adAPT NYC competition. The premise behind the contest was to develop a new model of housing to adapt to the city’s changing demographics. This challenge waived the current zoning laws which limits the minimum size of a dwelling (requiring at least 400 square feet), to allow for the micro-unit concept.

The winning entry, “My Micro NY” consists of 55 units varying from 250 to 370 square feet, and start at a price of $940/month. The units themselves are pre-fabricated modules that will be “snapped” together on site like Legos.

Each unit features a 3 piece bath, kitchenette and living space with a 9’-10” floor to ceiling height, and Juliette style balconies.

The Museum of the City of New York has an exhibit Making Room: New Models for Housing New Yorkers open to the public through September 15, 2013 showcasing the winning design. Click here to see the 5 other finalists.

Another development, which is already underway in Brooklyn, is Atlantic Yards. This development will not only contain a new entertainment arena, The Barclay Center, but offices, eight acres of open space, and 6,430 residential units; 2,250 of which will be permanently affordable for low to middle income households. What makes these units even more special is that they are all prefabricated off-site at the Brooklyn Navy Yard and trucked to the site. Once completed, the project will have the distinction of having the world’s tallest modular building at 32 stories. The development is also striving for a LEED Silver Certification. You can keep up with the project by visiting the developments website. They give daily construction updates!

Modular building is becoming a competitive alternative to traditional construction. Because the modules are assembled in a controlled environment, construction costs and waste are reduced, and construction time in the field is cut down significantly. JL Architects was fortunate to work with Weston Solutions, Inc. and IDBS in 2011, when they decided to use modular building in the construction of the Wyalusing Hotel Annex in Wyalusing, Pennsylvania. The Annex provided an economical solution that not only benefited the employees of Weston Solutions while in town, but the local economy as well.

JL Architects is currently working again, in conjunction with IDBS, on a 3-story multi-family apartment building in Madison, NJ, which features 13 apartments, constructed using modular building systems. The apartments range in size from 1,730 to 2,950 square feet and feature both 2 bedroom with 2 bath units, and 3 bedroom with 2 ½ bath units. There are 8 private garages, with an additional 8 parking spaces in the basement, along with 9 storage units. Adding interest to the site is General Anthony Wayne’s house, which is just next door. General Wayne was one of George Washington’s Generals, and his home is listed on the National Registry. Construction is scheduled to begin this winter. 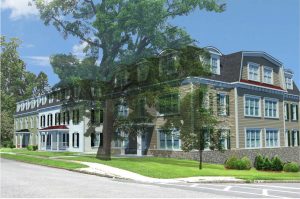 Modular construction may have been made popular 100 years ago with home kits by Sears and Roebuck Co., but it looks like this building type may just be the way of the future!

Over the course of the last 25 years JL Architects has seen the advent and avid use of the CAD (Computer Aided Design) from the once staple of hand drafted blue prints. In fact, our firm began because of the John’s forethought to “sell” CAD as a tool for designing retail spaces. His idea took off and so did our client roster. In recent years those in the industry have been migrating to BIM software (Building Information Modeling) which helps to design a building with an integrated vision of the architects and the engineers. The design team builds the project digitally as a collaborative process to reduce problems in the field. It’s a virtual 3D drawing of the building, and now leading designers are taking that 3D model and attempting to create a “3D print” of the space. There aren’t many that are joining in this race, but it is a fire that is fueling a couple of firms!

One of the largest 3D printers in the world is just outside in Pisa, Italy. The printer was invented by robotics engineer Enrico Dini and it uses sand along with a binding agent to create a “stone” material. The gantry style printer is housed in a warehouse and can produce up to 30 cubic meters of printed forms per week! He printed the first architectural structure in 2009 with architectAndrea Morgante. The project printed was a 3 meter high pavilion which resembled an egg. With advancements in technology like this, the world of architecture is exploding with possibility and promise!

If you like to learn more about the architects that are participating in this race, then click on the links below and indulge your imagination!

The Man Who Prints Houses