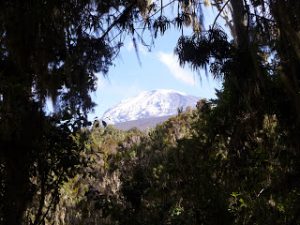 An expression that is frequently directed to momentous events is, “I guess you can check that off your bucket list”. Reflecting on the discussions in the movie with Morgan Freeman and Jack Nicholson, I think there are simple pleasures that we can apply the same expression to as well. 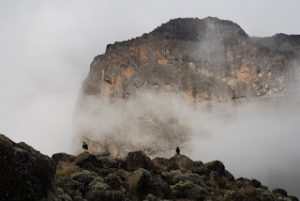 In my case I had each type of experience while climbing the highest peak in Africa, and the highest freestanding peak in the world. Mount Kilimanjaro stands at 19,340’ above sea level (for Information on the 7 highest peaks see; (Seven Summits). The extreme part of the adventure is self-evident, but you may ask, “What was the simple pleasure that touches your heart and the quiet parts of your being?” In this adventure it was spending 10 days in a far away land with no phone and no internet with my daughter, Mary. 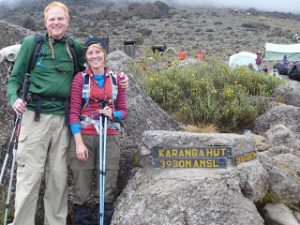 The hike and summiting was a great adventure; being the first to see the sunrise in Africa, the extreme cold (about -20 degrees F at the summit), hiking a steep and potentially life-ending trail for 6 hours in the dark, not to mention oxygen deprivation. For this we gain some bragging rights. But being guided by my 5’-2” blonde 20-year-old daughter in a land that has a different view of women (especially young white women), bestows a different kind of “bragging right”. After being in Africa for only 2 months she was versed in the customs and conversant in KiSwahili. Who in America would have known there were so many Swahili languages? She taught me the way KiSwahili words are pronounced (accents on the 2nd vowel) and that all the words end in a vowel. They also don’t have a hard “K” sound. I know about the Masaai warriors and how they prove/earn their manhood (kill a lion with a single spear – failure is unpleasant). The Masaai also believe that they are the oldest civilization on earth. She also taught me a lot about how Africa sees the world and how it is different from how Americans see it. 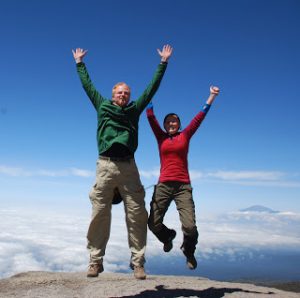 I can go on and on, but I will simply leave at these two thoughts:

1-I don’t have a bucket list’ but if I did then climbing a mountain like Kili would probably not be on it; spending time like this with Mary (or any of my 4 children or wife) would. 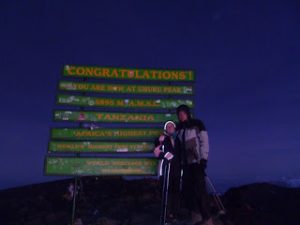 PS- If you decide you have a bucket list or simply want to go, call me. The guide is a huge part of the trip. Our summit was Baraka’s 193rd trip to the top. You will be pleased. You will get to the highest summit in Africa and the highest freestanding mountain in the world.

As a company we strive to provide our clients with the services that they need to keep their projects running as seamless as possible. Our team works together on a daily basis to meet and exceed expectations of our clients; while working to improve our quality of service. Recently one of our valued clients, Ignite Restaurant Group, the developer of Joe’s Crabshack and Brickhouse Tavern & Tap restaurants, wrote to express their appreciation for our “Win-Win-Win” approach to architecture.

JL Architects started working with Family Dollar in early 2011. Our in-house team is led by Job Captain Martin Summers. Family Dollar and JLA have collaborated on 44 store in 6 states. Our relationship continues to flourish with 11 stores currently under construction and many more slated to begin in 2013!

One of our most recent projects located in Bloomfield, NJ opened its doors at the end of 2012. It combined 4 existing smaller stores in the front of the building with a vacant office space in the rear. All of the spaces were gutted to make way for new finishes and mechanical systems. This project was particularly rewarding because of the overall improvement to the architectural facade of the building and streetscape. By removing the signs and layers of alterations for the 4 smaller stores then combining them into the storefront of a single tenant; the façade now closely reflects the original fabric of the neighborhoods’ architectural heritage.

There are many benefits to renovating existing historic buildings, if you are interested in reading more about those benefits check out the articles below:

What is Historic Preservation?

As 2012 ends and 2013 begins, we fall into the “Calendar Trap”; evaluating our lives at an otherwise irreleveant milestone, December 31. Perhaps it is because we change that number on the date so seldom or our paystubs are reset to zero. For whatever reason it is an activity many of us share in on the same day.

Another annual ritual is the New Year’s Resolution. Many are made and almost as many are broken, but the optimist in me says that a single fulfillment is progress and a victory over simply marking time.

In recogition of the tradition of taking on a goal and the well meaning motivator for making it a public intention, we offer up a few of our own personal resolutons:

A couple interesting additions and comments on resolutions:

Here at JL Architects, we have resolved to be more aware of those in need around us. After a successful Thankgiving food drive, and then supplying gifts to children in need at Christmas, we recognized that needs don’t end with the holidays. Deanna is spearheading our effort to reach out with our time & resources to the needs of our larger community.

Our first effort for 2013 is helping out the local Senior Center with boxed lunches. If you are local to West Chester, and would like to contribute to this effort, donations of Tuna, Soup Cans, Fruit Cups, Raisins, Dried Fruit, Crackers, and Granola Bars will be collected in our office through January 9, 2013. All donations collected will be delivered on the 11th of January.

We will also collect canned goods and non-perishables year round for the Chester County Food Bank. Our staff donated 54 pounds of food to the Chester County Food Bank for the Thanksgiving drive in 2012. We would love to triple that amount this year. Other investments of our time will likely include the Summer Harvest program. This is a program where our employees will donate 2 hours a week working in the fields, planting, weeding and harvesting healthy vegetables for families in need.

We are grateful to all our clients whose contribution to the growth of JL Architects allows us to share with others less fortunate. Our resolution is to make a difference in our community in 2013!